Home>Blog >AI Artists You Should Know About

AI Artists You Should Know About

AI has been used widely across many professions, but how did it find its place in art? Currently, it’s not a very common tool for artists, but the good news is that this number is increasing. As the two have not been mixed often, this has created some questions about art. There are several fields in art in which AI has taken its place – dance, music, digital media, and visual art. As people have been trying to connect with AI, a few artists have tried to bring AI art closer to all the people around the world using what they are doing the best.

What Have Dance and AI Achieved When Combined?

Dance may not seem connected to artificial intelligence, but artists and engineers have teamed up to work on different aspects of combining these two. It has always been a low-tech art form to most people. But some contemporary dancers and choreographers have made it their mission to disrupt what was expected of dance. They’ve made AI and dance into a good combination that turns two waveforms into a new soundscape for people to experience. So how did dance meet AI?

Wayne McGregor is one of the few artists that are exploring art and technology. His forward-thinking choreography methods have opened the way to artificial intelligence to dive through dance. With his Studio Wayne McGregor, he focused on researching technology and collaborating with dancers, producers, visual artists, scientists, and software engineers to produce something new. His Studio Wayne McGregor opened the first of its kind space in Queen Elizabeth Olympic Park with the mission to be a place for collaboration across arts, technology, science, but also to be a place for making, developing creative practice.

Louise Crnkovic-Friis originally was a dancer and choreographer, but she has shifted to working within the intersection of machine intelligence, somatic practice, and neurodiversity. She strives to explore different ways and types of intelligence. Her expression is multimodal which allows her to take shape as textual, visual, choreographic, or somatic. Her most famous work is the “Generative Choreography using Deep Learning” which has been published as a science paper and reshaped the industry.

Music is not like a dance – it is everywhere around us, even in artificial intelligence. It is not hard to understand how AI music is made. In the last several years, AI music has gained much more relevance than it did before. Some people believe that AI music is the future of this art field. In this field, it’s not all about singing. Some artists are virtual composers (like AIVA).

Ash Koosha is one of the most famous AI musicians. He is primarily an innovator, producer, and futurist. His work is based on computer software. With his songs, he wanted to create a multi-sensory experience for people to have with music. At his first performance at the London Institute of Contemporary Art, he was using virtual reality to demonstrate the multi-sensory experience people can have.  One of the most famous works he created, with Isabella Winthrop, is “Yona” – a virtual singer that uses advanced technologies to create music.

Jai Paul Is Enforcing AI With His Music

Jai Paul is an English songwriter, record producer, and recording artist. His most famous songs are “BTSTU” and “Jasmine”. These two songs were influential on underground and pop music in the 2010s. He is part of the XL Recordings. After the release of these two songs, he did not release any new songs, or music for seven years. During that time, Paul formed a music collective with his brother, A. K. Paul. He also created Bronze, which is a technology that allows music creators to enforce machine learning and AI as creative tools for arrangement and composition. Also, Bronze is an audio file format.

Even Visual Art Has Been Impacted By Artificial Intelligence

In recent years, there have been numerous attempts to use digital computers as a way of producing visual artworks and some to understand the characteristics of an art piece. This can seem rather peculiar if you think of computers as devices that merely do arithmetic. However, computers are largely perceived as universal systems for symbol processing, which means they should be capable of analyzing artworks. Some people were optimistic, and they created artworks by computers.

Hands and Computers Working Together With Sougwen Chung

Sougwen Chung is one of the few artists who has used both hand-drawn and computer-generated marks in her work. Her goal is to present the closeness and intimacy between two people and between a person and a machine, which is what she based her work on. One of her most famous works is Drawing Operations (Duet). Drawing Operations (Duet) is a performance centered on a drawing collaboration between humans and machines. With computers and humans collaborating, art has a chance to evolve and produce a new experience for us to see.

Tom White is an artist investigating artificial intelligence and machine perception. He is a lecturer who has been teaching creative AI and computational design at the Victoria University of Wellington School of Design. In his work, Tom wants to show how machines see, know, and tell the world. We already know what we see, but the question is how machines interpret the world? Tom wants to show that machines are our reality, with computers as our future.

Collaborating with AI systems, he is creating physical abstract prints that are reliably classified by neural networks. We are better able to see the world through the eyes of a machine. One of his most famous works is Synthetic Abstractions. Synthetic Abstractions is a series of abstract screen prints that consistently register as “Adult” or “Explicit Content” by the major image recognition systems (e.g. Google, Amazon, Tumblr, etc). The series explores how machines perceive explicit content.

The 21st century is the era of science and technology. With the rapid development of digital media and technology, more and more digital technologies begin to appear in exhibition design. The introduction of digital media art makes the expression of modern exhibition design more diversified and interesting and strengthens the experience of the exhibition. The development of new things is facing new opportunities and various challenges. Several artists passed challenges.

Neural Networks and Code in the Works of Mario Klingemann

Mario Kilingemann is a German artist, and he is known for his unique work. His tools are neural networks, code, and algorithms. His interests are more than just art. He is also interested in artificial intelligence, glitch art, visualization, robotic installations, etc. His artistic practice has evolved alongside breakthroughs in AI and deep learning. His many works have been exhibited in many articles such as Neural Network portraits, Lowpoly Bot, Mona Tweeta… Currently, he is a machine learning artist in residence at the Google Cultural Institute in Paris. In 2015, he won the Creative award of the British Library.

Matthew Yee-King is a well-known musician and researcher. He is an expert in creative digital signal processing and computer music. He worked with some of the leading names in the UK experimental music scene. One of his songs was in the FACT magazine’s list of top 100 greatest IDM tracks. He is currently working in the department of computing at Goldsmiths of the University of London.

Have AI Artists Made an Impact?

It’s becoming clearer that artificial intelligence can help different industries, and it has even made its place in art. 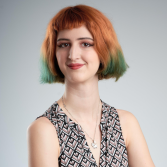 An art historian by degree, a Digital Marketer by passion and profession. As a part of Wonderland AI, I hope to contribute to the world of AI and machine learning.

<Blog/>
Women in AI and How They Shaped the Industry